The Trouble With the Curve follows the story of the deteriorating health of Gus (Clint Eastwood) and his nose up, head down daughter (Amy Adams) as they grapple to establish a bond lost in the wake of some soiled history.

Clung to each other’s cold shoulders by default, they repel relationships with the rest of the world and are adamant to remain their own island: she doesn’t need a man as much as he doesn’t need a doctor which obviously isn’t going to be the answer to a happily-ever-after.

Amy plays the femme fatale role of tirelessly proving she’s more than heels and hair and who needs a jock strap as big as the next rookie player. This is at no expense to her femininity, of course – how else is she supposed to provoke the breathless reaction from Justin Timberlake who Amy, due to her auburn head being too far up her Blackberry’s behind, fails to notice his cherub charms. 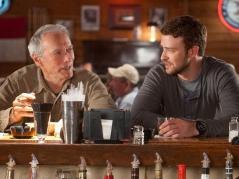 Yeah, Britney was rubbish in the sack

This film basically represents the demographics usually left sitting on the bench: The possibly-past-it elder who scoffs at the advancements of technology, the silent unsuspecting genius who’s got little cash but a lot of swing, and the strong sassy female who feels that what she lacks in testosterone she’ll make up for in good old fashioned hard work. Sure does yoga and wears heels, but this chick knows her baseball, will kick your ass at pool, drinks straight and neat from the bottle and tends to say “I’m starving” a lot, suggesting she actually enjoys her food.

It’s a classic, but not always as classy, tale of underdogs V fat cats and tradition v technology. The bad guys are the mechanically thinking suits against the holistically minded traditionalists yet both teams, as ever, are financially focused.

You can usually count on a film with any involvement with Clint Eastwood to be a sure fire hit yet Trouble With The Curve fails to hit a home run despite its promising team of hard ballers. (Oh, and Justin Timberlake…who, yes we get it, can actually act despite his distracting beauty).

Hollywood’s habit of force feeding stereotypes is prevalent as ever and the characters are stuffed into their pigeon holes often to the point of suffocation. A little subtlety perhaps would have simmered this over boiled plot. As if you needed another baseball metaphor, I’d say this was a swing and a miss. 3/5