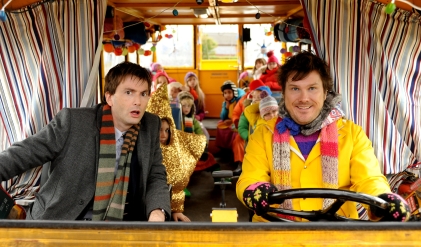 This is a film that’s about as ridiculous as still believing in Santa. So I wasn’t expecting the next Oliver Twist, but a thawing of my grinched heart in preparation for Christmas wouldn’t have gone amiss.

Mr Poppy (Marc Wooton) is a character that you wouldn’t want near your kids if they were drowning and he was the only one who could swim. His affiliation with the kids is borderline creepy as he’s worryingly attached to a group of should-be cuter kids with varying ages despite being in the same class.

…the double-edge jokes needed for a successful family flick leave the kids baffled and the ‘rents wondering if they should call the police.

Since the class’ favourite teacher Mr Madden (Martin Freeman from Nativity!) left the school in Coventry (although if he’s actually found under Mr Poppy’s patio in tiny chunks it wouldn’t be a surprise), they’ve repelled any new blood that dares attempt to enforce some sort of curriculum and take his place. My Poppy’s even got a shrine in his locker to this guy. Candles and everything. Where’s health and safety? Where’s HR?

When Mr Peterson (David Tennant) leaves his pregnant wife (Joanna Page) on the Habitat sofa to challenge Mr Poppy and the class’ resilience to a professional educational, he unenthusiastically gets swept up in the application of a school singing competition in Wales – X Factor style. 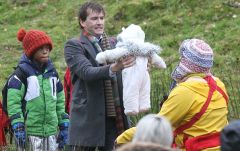 What follows next is a catastrophic journey involving kidnapping babies, sleeping in caves and falling off mountains in a bid to make the contest in time. Do they make it? Of course they do. Do they win? It doesn’t even matter.

What does matter, is the total oblivion to the irony the story has over making the one black kid in the class the pin cushion of all things unfortunate. Not only is he mute (since pops left – obvs), but he’s the one who happens to slip off the cliff in a life-or-death moment, painfully acting his way though near tragedy with the face of someone who’s merely been stung by a nettle. He’s also the only one bereft of a father.

As if that’s not a bad enough reinforcement of the stereotype, he gets to sing a little song about it (because he’s the one with a ‘voice of an angel’) – he can’t talk, but he sings like silk feels *palm face*. The lyrics ‘everyone’s got a dad but me’ are sung in a pitch that would impress the sparrows even if it is autotuned more than a T-Pain tune. Racist? Don’t be silly. Clumsy? Very.

The film’s not completely laugh-less and it enjoys an optimistic start with some smirksome cuteness, but some of the double-edge jokes needed for a successful family flick are handled inarticulately leaving the kids baffled and the ‘rents wondering if they should call the police.

Nativity 2 does everything to reinforce the rule of Sequels Are Shit but it did it’s darndest to raise a laugh. It’s just a shame we’re laughing at it and not with it. Ho, ho, ho? No, no, no. 2/5

One thought on “Nativity 2: Danger In The Manger”