Dear White People…are you ready for your close up?

Black face. It wasn’t ok then and it’s not ok now. So hearing that the ‘blacking up’ past time is still used for ‘bantz’ in some American high schools is woefully tragic. But rather than get angry, writer and director Justin Simien has responded with a satirical sledgehammer of a movie – Dear White People.

It’s already won the Jury Award for Breakthrough Talent at Sundance and seen Simien named as one of Variety’s 10 Directors to Watch. Now, after all the Stateside buzz, it’s the UK’s turn to digest the film’s uncomfortable truths with a spoonful of sugar.

Set in the fictional Winchester University campus, we follow four black students who are weary of being hit with the stereotype stick, but it’s not just their caucasian peers they’re exhausted with. It’s also with the expectations of how ‘black’ they should be from their fellow ‘brothers and sisters’, as if melanin isn’t enough.

The characters serve as a revelation to anyone who subscribes to what MTV tells you about black people; There’s the Zeus-like Troy Fairbanks (Brandon P. Bell) who is son of the school dean (Dennis Haysbert) so needs to keep his whistle clean. Dating a white girl (Brittany Curran) who doesn’t know the difference between weave and ‘weaved’, helps dilute any threat his obvious masculinity may present. The other end of the axis is Samantha White –  a radical, rootsy presenter of the ‘Dear White People’ broadcast. Using a Dear John style, she coos sarcastic observations to white folk who, through unwitting ignorance (or lack of rhythm), have pissed her and the black community off.

Geeky misfit and wannabe writer Lionel Higgins (Tyler James Williams) sports an afro, but this is no style statement. He just doesn’t have time to get a trim in between listening to Mumford & Sons and trying to win over his handsome editor George (Brandon Alter). And then there’s the glossy Colandrea Conners (Mad Men’s Teyonah Parris). She’s hoping her synthetic hair, blue eyes and clothes as tight as sausage skin will help her find her ‘Ryan Gosling’.

As the characters uncurl from their shell of stereotype, we waltz up to the film’s crescendo – the African-American themed party. No good can come of this when the invite encourages Lycra, auto-tuned hip-hop and ‘purple drank’…

The film is quick to answer the preempted accusation of being an angry black film. In the way modern feminism doesn’t burn as many bras to make a point, Dear White People tackles racial ignorance with a fist full of finesse and satirical splendour. It really goes to town with the belief that ‘satire is the weapon of reason’.

Exorcising the punchy spirit we miss in modern Spike Lee joints, the accusing piece-to-camera interludes serve to propel a point – something the linear narrative would struggle to purport with necessary clout. And while hailing Spike Lee, the movie wags a weary finger at the other bankable black movie director Tyler Perry, who might now think twice about his next ‘blacksploitation’ flick. 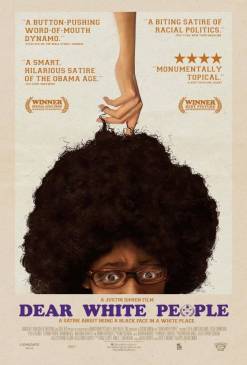 The acerbic script fizzles with one-liners that come from someone who’s properly done their research. Or from someone who knows what it’s like to be branded exotic because of their race, or how big their hair is (aka ‘a black hole for white peoples’ fingers’). But the film isn’t just a bitchy request to white people to be less annoying. It’s an articulated floodlight not just on how blacks and whites interact with each other, but how they straddle their own cultural identity. It airs the disappointing fact that racial definition often rests on fickle fashions.

Ignore the title. This is not just an open letter to white people. It addresses anyone privy to stereotype – which might just mean everyone. Daring to have that dream, you can feel the huff of a communal sigh that anticipates a day of being judged by the content of character, not skin.

There’s a lot going on in this movie and it can feel a little bloated, but we’re starved of films that address such topics (and with a near to all black-cast) so can be forgiven for being somewhat of a filibuster. The movie is self aware and knows its complicated, but using neat chapters to break up the story gives it the groove it needs.

Beyond the exemplary performances and notable direction, Dear White People can celebrate  separate triumphs. It highlights a famine of black films in the mainstream and proves a famished appetite; When the London Film Festival opened its booking lines, the film was one of the first to sell out, (incidentally so was Nas: Time Is Illmatic documentary). Of all the press screenings at the festival, Dear White People was the only one yet to have to turn journalists away after reaching capacity. And when the film’s only two London screenings sold out, a disappointed Cherelle Morris launched a Facebook campaign called Bring Dear White People To London in the hope of encouraging more viewing opportunities and is nudging the 1000 likes mark, something that will echo the film’s crowdfunded roots.

Read how THAT Dear White People poster came about on Vulture.com