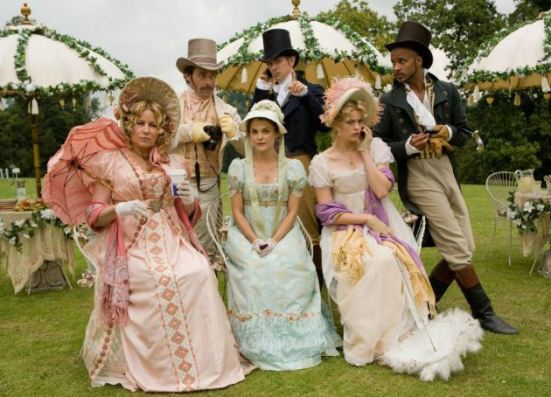 You’d be hard fetched to find a film with someone from Flight Of The Conchords, American Pie and Hollyoaks, but somehow the brains behind Austenland have managed to make these planets collide. It’s as if they’ve played Chatroulette with the entire database of IMDB. Or maybe it was BOGOF on the casting agent’s books, and casting Ricky Whittle with an awful Caribbean accent was part of the small print someone failed to read until it was too late.

The fusion of talents may be odd but in its defence, it supports the intentional kookiness of this kitsch film.

Jane (Keri Russell) is a 30-something Yank whose obsession with all things Jane Austen is the reason she’s still on the proverbial shelf; shrines to Pride & Prejudice fill the crannies of her home in the same fashion as the most terrifying 1D fanatic’s bedroom.

Austenland dangerously flirts with the exploitation of 30-something women who, according to Hollywood, may as well glide around on their back with their legs in stirrups in the hope of getting pregnant before it’s too late…

In a last-ditch attempt to create a reality from the fantasy of finding a Mr Darcy, weary Jane empties her life savings and flies to ‘Austenland’ which promises to recreate the real Jane Austen experience. The retreat insists visitors ditch technology, stuff themselves into corsets and take up embroidery to pass the time as they await a wooing from one of the velvet-clad actors – mainly Henry Nobley (JJ Feild), Martin (Bret McKenzie) or Captain George East (Ricky Whittle). 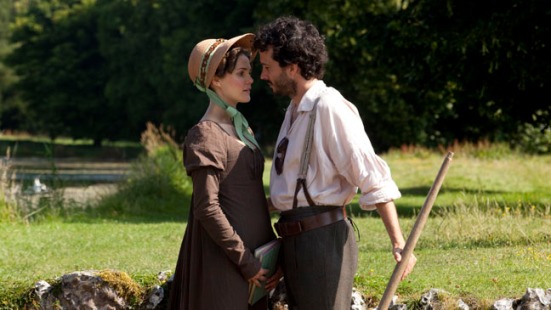 Onions for lunch was it?

As the actors get to work on exploiting the women’s infelicitous fantasies, this spurious world the hapless customers have invested in becomes more expensive on their emotions than budgeted for.

Austenland dangerously flirts with the exploitation of 30-something women who, according to Hollywood, may as well glide around on their back with their legs in stirrups in the hope of getting pregnant before it’s too late. However, we’re spared a barrage of clichés when Jane gets to grips with her unrealistic desires…a cliché in itself perhaps.

Screenwriter Jerusha Hess already has Napoleon Dynamite on her CV and has since cowritten the screenplays for Nacho Libre and Gentlemen Broncos with her husband, Jared Hess. Those are some hard credentials to live up to and perhaps without them to compare them against, Austenland would make more of an impression.

Enjoyable, camp, and genuinely laugh out loud funny at times, Austenland isn’t quite as timeless as a Jane Austen novel. Saying that, Bret McKenzie in riding boots is a memory I’ll happily cherish. 3/5