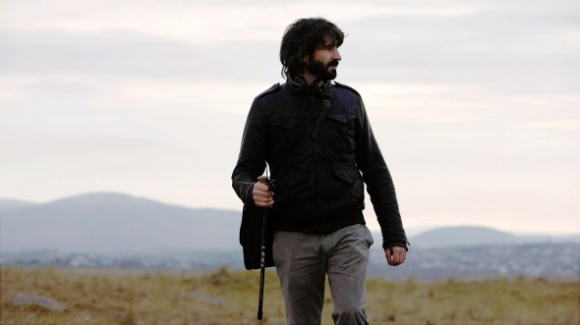 If the title hadn’t already given it away, you should know that Silence is about the refuge and relationship with sound. Otherwise, it’s just a beautiful film about a bearded man skulking about the Irish countryside and confusing the locals with a furry stick for a microphone.

This is cinematic art at it’s most lush. With shots you want to peel of the screen and hang on your wall, there’s a refined beauty in every scene.

Our main character, real life poet Eoghan Mac Giolla Bhríde, is on a journey to reminisce on some poignant memories by re-creating sounds and finding a place on earth void of man-made noise. What becomes a pilgrimage of reenactments and tip-toeing over the rural countryside for him, becomes a rich visual feast for us.

The film encourages an understanding of sound on a physical and emotional level. Too often we shun sounds as memories over visual artifact or nostalgia-evoking smells. It may be common to whiff at a lover’s T-shirt to remember last night’s tousle, but it’s not exactly sane to to slam the door in the way they once did to remind yourself of how they left.

In the knowing that this film is engaged with the appreciation of sound, suddenly everything you hear has significance. The rustle of a million blades of grass rustling in the wind. The waves as the roll up from a gloomy horizon and crash against the dark rocks. The combined sounds of nature chugging in your ear like sleigh bells on a dewy morning. It all becomes art.

With this in mind, don’t eat your popcorn loudly. You might as well stand in front of the projector and make bunny ears with your fingers. Don’t ruin it.

Leaving the cinema and stepping out into an arena of real life noise can be an existential moment. The new awareness of everything you hear is met with fresh appreciation or a new irritability: the planes roaring across the sky, to the chatter of foreign vocabularies fusing together to speak one universal language of noise. I can only imagine it’s like replacing the battery in a hearing aid you didn’t realise was dead.

Artfully edited with the dialogue often lapping over the gorgeous cinematography, it presents a beautiful and bewitching experience.  Silence, really is cinematic gold.

Silence is out now.