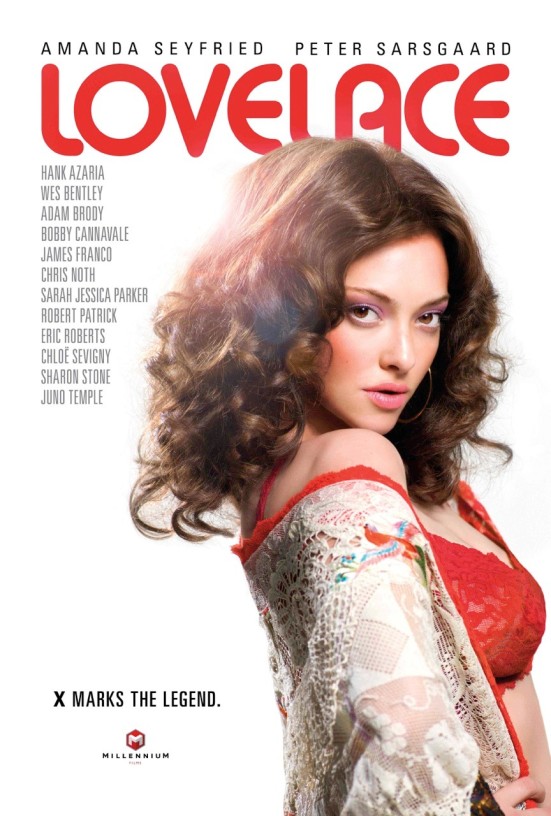 Amanda Seyfried nabbed the lead of Linda after Lindsay Lohan was scrapped due to various issues involving yo-yo visits to jail and rehab. Whether she jumped or was pushed is debatable but it’s hard to imagine Lindsay channelling the cumbersome vulnerability required to play Lovelace. Let’s face it, Lindsay’s halo was used as a Frisbee soon after Bobby never to be seen again – she’s about as innocent as a starved Beagle in a butcher shop.

To be able to play a role that exudes hard-core sex appeal synonymously with kitten-footed naivety takes some class. In her meatiest character yet, Amanda Seyfried wears the role well with those big saucer eyes saying everything the dialogue doesn’t.

Amanda leads a cluster of well-heeled stars from Chris, Mr Big, Noth to a drab-looking Sharon Stone who will require a double take away from her usual decadent appearance. James Franco borderlines comedy as his role of Hugh Hefner but just about pulls it off with that watery smile and pinprick eyes. It’s a shame, but he really plays sleaze-balls worryingly well.

Adam Brody looks all grown-up as he plays Harry, the giddy co-star of the newly–branded ‘Linda Lovelace’ as coined by her excitable marketers Jerry (Hank Azaria) and Butchie (Bobby Cannaval). They are won over by Linda’s ‘skills’ when her husband Chuck (Peter Sarsgaad) shows them a home movie of their lovemaking despite her ‘artsy’ look and lack of lady lumps.

James and the giant peach: Franco as Hugh Hefner.

Artfully shot as if through the gooey hue of an Instagram filter, Lovelace is well-rounded with gritty dramatics and some excellent performances from a glittery cast. However, the bleak subject matter was perhaps handled too cautiously as it seemed to turn frigid on portraying the feminist values Linda embraced post trauma. Angling the negative attitudes of the press and public towards her ordeal would have provided a thoughtful snapshot of the sexism and the sexual liberation (or lack of) for women in the 70s and 80s. Instead, this was a hefty bone left un-chewed and proved to be a little anti-climatic.