The concept of celebrity is having a bad day. It’s being snapped with no make-up, a bag of white powder and with a camera lens that’s so far up its skirt it could provide a smear test.  Nothing new to see here but again the Warhols of contemporary cinema are painting a grubby picture of our obsession with  fame and the misjudged morals of our youth. If the forthcoming Bling Ring (starring Emma Watson and directed by Sophia Coppola) and the quietly released Antiviral are the foundation courses in this lesson, Harmony Korine’s Spring Breakers is the master class.

Don’t let bikini-clad Selena Gomez and Vanessa Hudgens put you off, or turn you on. They’ve not been cast for their acting skills – not that they’re bad, far from it, but their purpose is what they represent  and the context of their irony. The young girls, probably still getting to grips with tampons, are better known for their Disney Club associations but Harmonie Korine’s warped ‘pop poem’ has seen to it that they’re emancipated from the grooming that saw them all veneers and jazzhands.

Grins are replaced by cocaine gurns as they form a mini gang of girls who just want to break free for Spring Break – even if it means robbing a little chef in pink balaclavas. Caught in those deluded dreams of thinking youth makes you invincible and tomorrow never comes,  the scantily-clad skanks embark on a hedonistic hamster wheel that reveals the perils of not knowing when the party is over. 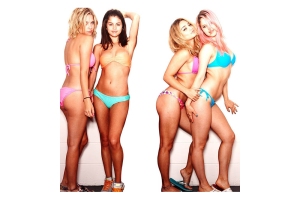 In what’s set to be Harmony Korine’s most accessible movie (Trash Humpers and Kids wasn’t exactly fun for all the family) the notorious director presents a film about a culture whose cream is so curdled  you can smell the sour cheese.  But he’s not condemning it, he says,  nor is he standing on a soap box wagging a finger and tutting at the ‘kids of today’.  He’s holding this fast, fickle and fantastical MTV inspired  life up and ridiculing it in all its neon glory.

Korine calls his film a ‘beach noir’ and uses Spring Break as the perfect stage for his cultural analysis: ‘in metaphorical terms, even the term ‘Spring Break’ and what it represents, what it can be, the idea of the destruction of innocence and disappearing into the night’.

Where Spring Breakers highlights the hyper-sexualised and violent  themes of today, The Bling Ring picks up on the unashamed greed spurned from the sad aspirations of tacky celebrity culture.  Director and writer Sophia Coppola saw the sad subtext in the true story that saw a group of Californian teenagers rob the homes of Lindsay Lohan and Paris Hilton – to name but a few of the A-list victims.

Inspired, Sophia has made a brilliantly stark movie based on the brazen events that took place throughout 2008 and 2009.

Coppola clearly joined in with a communal sigh when the news covered Lindsay Lohan’s yo-yo visits to jail like a fashion feature.  Her arrests are praised not pitied and served to propel her celebrity not condemn her disobedience.  With this knowledge, it’s no wonder jail was an after-thought for these sticky-fingered teens when rummaging around Paris Hilton’s draws. If they get arrested – they can sell their story and gain kudos after ‘finding’ themselves in humanitarian work for some country called Africa. If they don’t they cop a pair of Prada shoes once worn by a woman who’s famous for being famous. Win-win.

Yes the world’s gone a little mad. Convicted rapist, Mike Tyson, flogging caffeinated ‘sex energy’ drinks and the existence of Snooki proves this. But at least these bubblegum  lives – thin, transparent and set to burst at any time after too much blow – provide a muse for Hollywood’s most fabulously facetious and artistic directors. They’re not getting angry, they’re getting even and using their name to highlight the preposterousness of this fame fetish. And who better to preach than from the people who have walked down more red carpets than the staff at Allied? For once, we don’t have to hate Hollywood, it’s doing a fine job of hating itself.