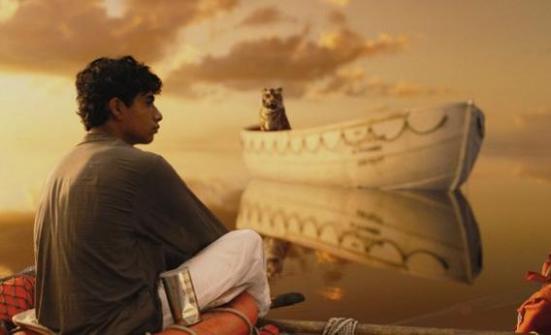 Life of Pi is what you get when you cross Castaway, The Jungle Book and a compare the meerkat advert but as terrifying as that sounds, its result is somewhat of a spectacle.

Hollywood loves a challenge so when the book was hailed as the ‘story that could never become a film’, the likes of Ang Lee took that as a hurdle just asking to be jumped. The overactive imagination of Ang (Crouching Tiger & Brokeback Mountain) brings this tale of fantasy, spirituality and magic to the big screen with results that would have let other directors forlorn. It’s a shiny, explosive journey through the kaleidoscope eyes of someone who’s still familiar with their inner child (or someone who’s just ODed on fizzy Haribos).

Films like these remind us why the cinema is still an imperative medium.

The effects are near perfect and only on occasion is it apparent that the drama before you is made by some very clever graphics. The cinematic version of this book manages to stick quite close to the path beaten by its author Yann Martel and the only bends in the narrative are reasonable enough to suit its universal appeal.

Saying that, the film could have perhaps been a few shades darker. At times the book is grim, as well as fighting the elements like some sort of X Man, Pi gnaws on raw animals, drinks turtle blood, eyes up his own pee and takes a chomp out of his pet tiger’s faces. Much in the same way The Beach was varnished over, Life of Pi is more sweet than sour and despite the carnage that takes place on this little boat, only a pinprick of blood is spilled. 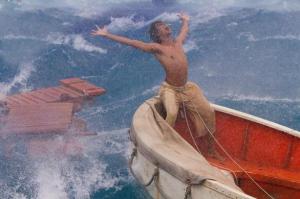 A piece of Pi

Hollywood’s habit of putting us in child seats to broaden the appeal (and the buck of course) hasn’t gone amiss. But a film like this was never going to come cheap and it looks as expensive and shiny as a Bentley’s dashboard.  With reasonable performances its more the artwork that provide the bulk of the action and although mildly triumphant it is to watch Raef Spall making it big, you can’t help thinking that he’s a curious choice and what good teeth he’s got all of a sudden.

Richard Parker (the tiger who’s named much in the ironic way someone christens their cat ‘Neil’) and the other beastly creatures, large and small, are awesome in the explicit sense and their effects are well-worth the 3D experience. Films like these remind us why the cinema is still an imperative medium.

Life Of Pi is a cinematic marvel and is well-worth the occasional sea sickness.